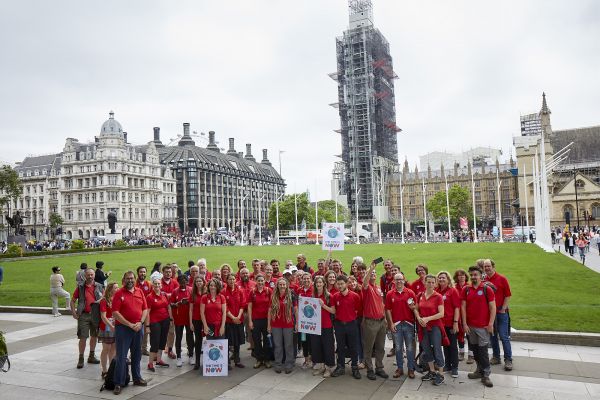 National Trust rangers from across the North of England have travelled to Parliament to meet with their MPs, to call for them to pass ambitious new laws benefiting people and wildlife, and back efforts to halt climate change.

Eight rangers [1] made the journey from the North of England to London on Wednesday 26 June to join the Trust’s Director-General Hilary McGrady and thousands of people from around the country – including school children, nuns, farmers, doctors and surfers – urging MPs to back action on climate change.

‘The Time is Now’ mass lobby [2] was organised by Greener UK and the Climate Coalition to urge politicians to put in place policies to halt the UK’s contribution to climate change and ensure an upcoming Environment Bill includes ambitious legal requirements to improve air quality, protect wildlife and tackle plastic pollution.

Gwen Potter, Countryside Manager for the Northumberland Coast, who travelled by train to attend the event, said:

“Despite being a long way from my usual place of work, I was really pleased to hop on the train to London today. It was amazing to see people from all walks of life come together to call for more action on climate change to help both nature and people.

The complex effects of a changing climate on nature are becoming increasingly frequent and difficult to solve. I’m now seeing frequent summer storms washing out nests on a regular basis and a decline in the numbers of surface feeding species such as terns. I’m calling on the Berwick-upon-Tweed MP Anne-Marie Trevelyan and all politicians to back stronger laws that will restore a healthy, beautiful natural environment – both on the Northumberland Coast and across the UK.

MPs were taken from the Palace of Westminster by rickshaw to meet constituents in the area around Parliament. Organisers say more than 12, 000 people travelled to speak to over 220 MPs.

At 2pm, those attending the lobby rang thousands of alarm clocks, mobile phone alarms and sirens to symbolise that ‘The Time is Now’ to act.

The lobby was held following an announcement by the government that it will set in law a target of reducing emissions of greenhouse gases to ‘net zero’ by 2050. Campaigners at the lobby called on politicians to support measures aimed at achieving the goal.

Adam Royle, Head of Advocacy at the National Trust, said: “It’s great that the Government has committed to setting a date for net zero emissions. But to make this a reality, we need bold and ambitious measures, starting with locking up carbon in our natural environment by looking after soils and planting more trees. To tackle declines in nature, we also need a new, world-leading Environment Act with targets for healthy air, clean water, thriving wildlife and green spaces where people live.

“Fifty of our rangers have travelled from miles around to be here today, with each one bringing with them powerful examples of the loss of nature and the effects of climate change where they work. These stories can’t be ignored; if the Government is to fulfil its promises to the public, it must act now.”

Director-General of the National Trust Hilary McGrady said: “It is incredibly encouraging to see so many people here today, standing up for nature together.

“I’ve seen first-hand the impact of nature’s decline and a changing climate on our fields and forests, built heritage and beaches - from species of wildlife diminishing to erratic weather damaging our historic properties. We’re working hard to restore nature and find ways to adapt but are facing increasingly tougher challenges.

“It doesn’t have to be this way. We can be the first generation that leaves our seas cleaner, cities less polluted, and wild places healthier than when we found them. But to do so, we need the government to take urgent action.”