Have you heard the one about

Have you heard the one about 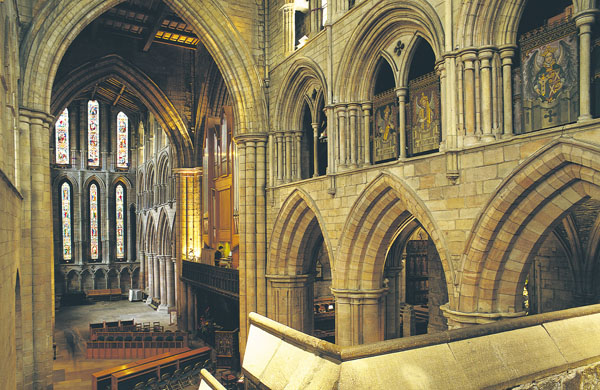 Introduction:
Northumberland’s many myths, legends and centuries old traditions? In a county with such along history of human activity and moody and dramatic landscapes, hidden nooks and crannies, Northumberland is a land of legends, and even some ghostly goings-on.

Arrive: Bellingham
Here’s why: “The Lang or Long Pack” is Bellingham’s very own murder mystery. In St Cuthbert’s churchyard is an odd looking tombstone, reputedly the grave of a robber pedlar shot by a local ploughboy whose suspicions were raised as to the contents of a curiously-shaped pack left at nearby Lee Hall. Bellingham’s Heritage Centre is the perfect place to learn more, including the real life horror stories of the medieval Border Reivers (raiders) and the Charlton Spur legend.

Depart: Bellingham
Here’s how: B6320 (s) – Wark – Chollerford – B6318 (direction Newcastle) – Heavenfield battle site (lay-by + information board)
Here’s why: Visit the tiny hamlet of Simonburn, south of Wark (detour) for a step back in time or view Roman archaeology at Brunton Turret on the A6079 near Chollerford. Hadrian’s Wall is connected with Arthurian legend and King Arthur, Queen Guinevere and their court are reputed to lie in enchanted sleep on the Wall near Sewinghsields crag.

Arrive: Heavenfield battle site
In 634/5AD King Oswald of Northumbria defeated the heathen Cadwallon in battle on this site. The night before the battle Oswald raised a wooden cross (a replica can be seen in the lay-by at the site) and prayed for a “heavenly victory”. Which came his way the next day.

Arrive: Dilston Castle and Chapel
Here’s why: Discover what “Lord Derwentwater’s Lights” were, gaze down on the “Devil” from the Lord’s Bridge on an easy walk through the Castle grounds.

Arrive: Blanchland village
Here’ why: Blanchland is entirely owned by The Lord Crewe Trustees, a charity established in 1721 by Nathaniel Lord Crewe, Bishop of Durham. The village was previously owned by the family of the Bishop’s wife, Dorothy Forster, whose nephew was General Tom Forster (1683-1738), cousin of James Radcliffe, Earl of Derwentwater and co-leader of the English Jacobite army of 1715. The ghost of Tom Forster’s sister, also called Dorothy, haunts the Lord Crewe hotel, the former family home, as she waits in vain for her brother’s return from exile. Hotel guests even claim to feel the weight of her presence on their bed!

Arrive: Hexham Abbey
Here’s why: There is nothing horrid about Hexham Abbey. Beauty, peace and tranquillity are assured. But the Abbey has some reminders of human frailty. Misericords (“Lord have mercy”) are special choir stall seats designed to help the medieval Augustinian Canons of Hexham Abbey stand upright during long church services. Rich carvings on the seats include a Green Man with leaves pouring from his mouth. And the Abbey’s “Dance of Death” painted wooden panels remind us all that death can visit anyone at any time.

Operated by the Heritage Centre; Bellingham Tourist Information Centre offers information on the local area including Hadrian's Wall and Kielder Water & Forest Park.  We supply infomation on local walks attractions, events, eating out, accommodation, walks, and much more, for Northumberland

Corbridge Tourist Information Centre is full with information on Hadrian's Wall, attractions, events, eating out, accommodation, walks, and much more, for Tynedale, North East England and the rest of the country. we have a range of maps and books for sale.

National and International award winning farmshop. The largest range of Northumbrian & local produce in the region, complimented with the finest foods from Britain and further afield.

Situated in the heart of the market town of Hexham, Hexham Abbey is one of the most-visited free attractions in the North East and has a new visitor centre, an interactive exhibition, cafe, and shop.

Have you heard the one

Northumberland is famous for its castles and Hadrian's Wall

A view from a train

Northumberland is home to some real hidden gems