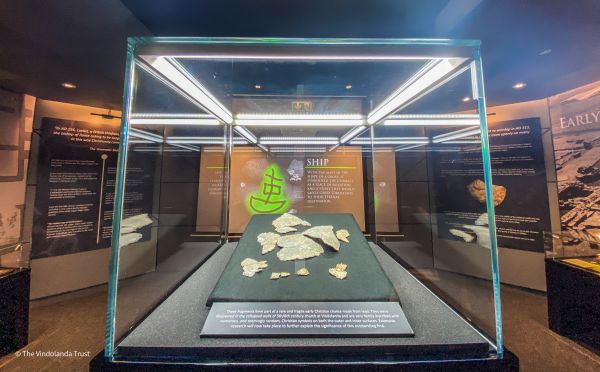 A recent discovery at Vindolanda has shed new light on a less understood period of our past in Britain, the 5th and 6th centuries. Buried amongst a rubble filled building, now known to be the remains of a 6th century Christian church, were 14 fragmentary remains of an incredibly rare lead Christian cup or chalice. Although in very poor condition due to its proximity to the surface of the ground, each fragment of the vessel was found to be covered by lightly etched symbols, each representing different forms of Christian iconography from the time. The combination of so many of these etchings and the context of the discovery makes this artefact one of the most important of its type to come from early Christianity in Western Europe. It is the only surviving partial chalice from this period in Britain and the first such artefact to come from a fort on Hadrian’s Wall.

The marks appear to have been added, both to the outside and the inside of this cup, by the same hand or artist and although they are now difficult to see with the naked eye, with the aid of specialist photography, the symbols have been carefully recorded and work has started on a new journey of discovery to unlock their meanings. The etchings include some well-known symbols from the early church including ships, crosses and chi-rho, fish, a whale, a happy bishop, angels, members of a congregation, letters in Latin, Greek and potentially Ogam.

The academic analysis of the artefact is ongoing with the post-Roman specialist Dr David Petts from Durham University taking the lead on the research and commented: "This is a really exciting find from a poorly understood period in the history of Britain. Its apparent connections with the early Christian church are incredibly important, and this curious vessel is unique in a British context. It is clear that further work on this discovery will tell us much about the development of early Christianity in beginning of the medieval period." The chalice now forms the central piece for a new exhibition in Vindolanda’s museum which highlights Christianity and the last periods of occupation on the site which opens on Monday 31st August 2020.  The Vindolanda Trust would like to thank the National Lottery Heritage Fund and  Lottery Players as their support towards this new exhibition has enabled the artefact to go on display.

Vindolanda’s Director of Excavations and CEO, Andrew Birley led the team working on the site of the discovery is delighted by the significance of the find. "We are used to first’s and the wow factor from our impressive Roman remains at Vindolanda with artefacts such as the ink tablets, boxing gloves, boots and shoes, but to have an object like the chalice survive into the post-Roman landscape is just as significant. Its discovery helps us appreciate how the site of Vindolanda and its community survived beyond the fall of Rome and yet remained connected to a spiritual successor in the form of Christianity which in many ways was just as wide reaching and transformative as what had come before it. I am delighted that we can now start to share our news about this discovery and shed some light on an often-overlooked period of our heritage and past".