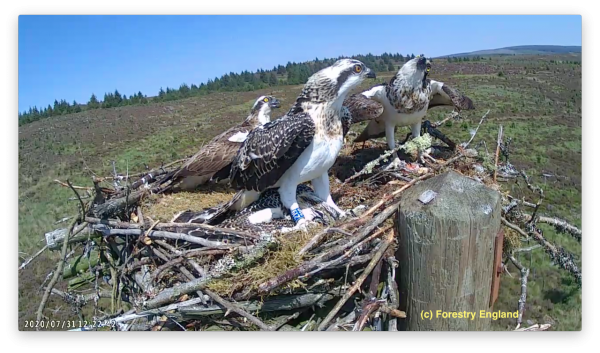 Ospreys arrived back to Kielder just as lockdown started and now, just as lockdown is showing signs of coming to an end, the Kielder Osprey Project is excited to reveal that 10 youngsters are learning to fly (known as fledging) before heading off to warmer climates for the winter.

This is the 12th year that ospreys have returned to Kielder Water & Forest Park. The 250sq miles of forest surrounding the birds, as well as the open water of the biggest man-made lake in northern Europe, provide an ideal place to breed.

The breeding season started well with 19 eggs, but this year has proved to be particularly challenging for the birds with five eggs not hatching and four chicks dying on different nests due to the wet and windy weather.

Fledging took a little longer than usual probably due to the weather, as there were days with above average rainfall and feathers develop slower in damp conditions.

Added, to this COVID-19 forced the cancellation of Osprey Watch which deprived thousands of visitors of the chance to see the majestic birds soaring the Kielder airways since April, however they were able to view the videos, images and updates via Osprey Consultant Joanna Dailey’s blog at kielderospreys.wordpress.com.

Last to fledge was Blue 214 from the new nest platform - Nest 7. Named Dally after the ruins of a motte-and-bailey castle at the edge of the Kielder Forest, he certainly lived up to his name - dallying about, keeping everybody waiting for him to fly off.

But it hasn’t all been without a few dramas along the way for the Kielder team with the three youngsters on Nest 1A each taking over a day to return to the nest - which is unusually long, and causing human concern in case they had crash landed somewhere.

Fledging is one of the most dangerous times in an osprey’s life as they have never landed anywhere before, but all three were fine and everybody breathed a sigh of relief.

The younger juvenile on Nest 6, 219/Dilston, arrived back at the nest during an intruder alert - another osprey was close to the nest - which resulted in the parents telling the chicks to play dead while they defended the nest from a landing. Who says birds aren’t clever?

So, sister 218/Druridge was dutifully lying low in the nest as 219/Dilston flew in, landing on her head. No harm done, but it did make for a great photo from the nestcam.

Osprey Consultant, Joanna Dailey says: “To start seeing ospreys flying around Kielder is wonderful and really lifts the spirits following the months of lockdown. The youngsters are now gaining flying and fishing experience, sometimes with the adults, before they head off to sunnier climes.”

Osprey mothers usually leave on migration around the middle of this month, with the fathers and youngsters following individually at the end of August or early September.

Enthusiasts can read this year’s timeline of activity at kielderospreys.wordpress.com.