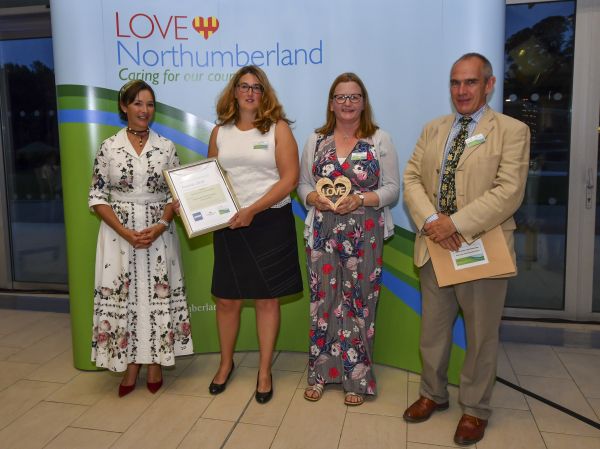 At the LOVE Northumberland awards ceremony at Alnwick Gardens where the Duchess of Northumberland helped celebrate the very best in community and voluntary environment work across the county, ‘Restoring Ratty’ scooped the best Coast or Countryside project which carries with it a £250 prize to be spent on the project.

The project, now in its fourth year, is committed to the reintroduction of water voles to the Kielder Water and Forest Park area of Northumberland and has all been made possible by National Lottery players through a grant of £421,000 from The National Lottery Heritage Fund.

Accepting the award, Kelly Hollings ‘Restoring Ratty’ Project Officer said: “Who would have thought that when we captured the first batch of water voles from the Pennines for our captive breeding programme that we would be standing here with such a wonderful award.

“This award is indeed testament to the work of our wonderful volunteers who, since June 2017, have helped to release 1489 water voles in the waterways of Kielder. Without them and the funding from National Lottery Heritage Fund, this project wouldn’t have even got off the ground.”

The project has allowed many people from urban areas to experience some of the most remote areas of Northumberland and offer project activities free of charge or at a low cost with the chance to see water voles in open access areas. It has also engaged with locals from the Kielder area and tourists, adding to the tourist offer in Kielder.

‘Restoring Ratty’ has an expanding schools programme over the next two years and will be inviting a number of schools to attend a full funded day of water vole activities. In addition, the project has welcomed a student placement for 9 months and worked with an MSc student from Newcastle University who is studying water voles for their thesis.