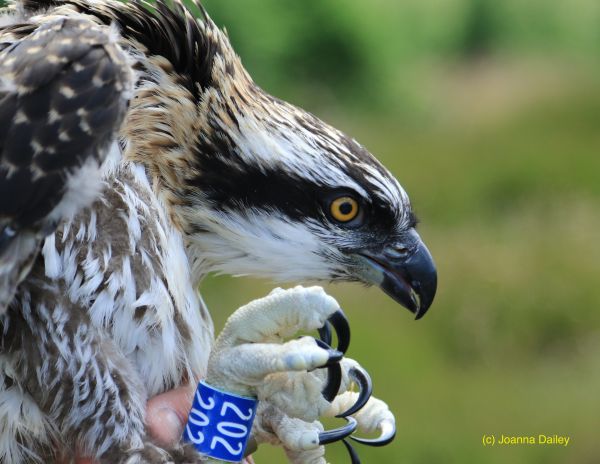 The eleventh year since ospreys returned to Northumberland has seen yet another record broken.

As the "soap opera in the skies" that is life for the Kielder ospreys continues for another season, 2019's chicks have now been ringed and named, with Kielder's heaviest ever recorded chick weighing in at 1,910g.

Cragside, the record breaking heaviest chick at 1,910g, is one of seven female chicks, along with Cheviot, Chesters, Coquet, Chirdon, Catcleugh, and Corbridge.

The names given to the male chicks were Craster, Cawfields, Charlton, and Chipchase.

Ornithologist Martin Davison said: "The weather conditions have been challenging for the Kielder ospreys this year, but to have eleven chicks thriving and one even coming in at a record weight is a real tribute to the parents.

"The Kielder ospreys are now a firm fixture in our area's wonderful wildlife calendar and this hardiness - to be able to adapt from the climates of Africa to those of a Northumberland summer - is a real example of this.

"The group continues to grow from strength to strength and as we approach the end of another osprey season, we look forward to what year 12 will bring."

Visitors can continue to follow the lives of the Kielder ospreys at Osprey Watch days held at Northumbrian Water's Landal Kielder Waterside, from 10.30am to 5pm every Saturday and Sunday, as well as some Wednesdays, until August 18.