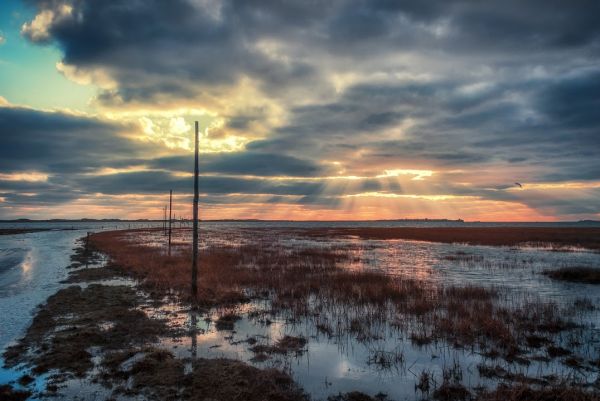 A photo of Holy Island Causeway by a self-taught local photographer has been chosen as the front cover image for next year’s Northumberland Coast Visitor Guide.

The winning entry was taken by Ben Wayman, a photographer who lives in Newcastle. Ben explained how his shot captured the beauty of the landscape saying: “As a change from my usual Northumberland woodland or hill walk, I decided tohead up the coast. I was familiar with the great sweeping beaches but thought I’d head to Holy Island/Lindisfarne early to watch the sunrise. Luckily, the clouds began to break up and the Sun burst through, lighting up the island. What better way to begin your day? We are so very lucky to have such a beautiful landscape on our doorstep; if we deserve to have it, then it serves to be looked after and cherished”.

The image was chosen as the winner of the Northumberland Coast Area of Outstanding Natural Beauty (AONB) Partnership’s photographic competition by judges Cllr Jeff Watson, Ken Stait and Jane Coltman. The shot will feature on the cover of fifty thousand visitor guides next summer. Ben will also receive a £150
voucher for Stait Photo in Morpeth.

Explaining why the image caught her eye, Jane Coltman, Deputy Images Editor at Johnston Press North of Tyne said, “ I was so impressed with the entry of images in this competition. The AONB celebrates our wonderful coast and the photographs we looked at reflected this so well. The winning picture is of an iconic place in Northumberland and the photographer's skill combined with the glorious light has produced a superb image”.

Ken Stait who runs Stait Photo in Morpeth and Hexham sponsored the competition and was also a judge said “We had quite a few photos of Bamburgh Castle to judge but the simplicity and serenity of this photograph set it apart. It is a beautiful shot.”

Cllr Jeff Watson, Chair of the AONB Partnership said “I was taken aback by the quality of the photos; there were some magnificent images. It was a difficult decision but I’m very pleased with the outcome. I think it’s not only a beautiful photo but also easily recognisable as Holy Island Causeway”.

The Northumberland Coast Visitor Guide provides information to visitors about the landscape, history, wildlife and villages of the coast as well lots of things for visitors to do and see during their stay. The guide will be published next March. Businesses wishing to advertise in the guide should contact Mike Jones at Command Print on
01665 713899 or email mj@cmd-print.uk

The judges also chose a runner-up and highly commended entry. Several other photographs that were shortlisted will also feature in the Visitor Guide:
Runner-up – Silky Waves at Stag Rock by Valerie Seaward
Highly commended – Ross Sands by Ben Wayman