Northumberland - A haven for hen harriers once again 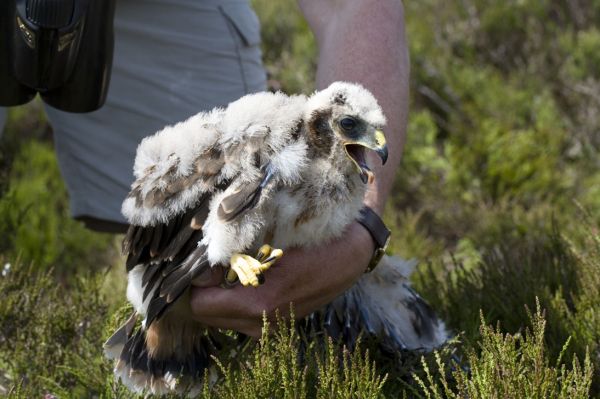 The Northumberland Hen Harrier Protection Partnership is delighted to announce that three pairs of hen harriers have managed to successfully nest in Northumberland this year, from six nesting attempts, with a total of 11 chicks fledging.

This spring saw an increase in activity with even more birds performing their spectacular courtship displays known as “sky dancing” across the region, with three pairs eventually nesting on land managed by Forestry Commission England.

This is the fourth consecutive year that Northumberland has had successful hen harrier nests, proving the North East to be the most consistent place for breeding hen harriers in England.

Gill Thompson, Ecologist at Northumberland National Park, and Chair of the Northumberland Hen Harrier Protection Partnership said:  “It is great that we have had hen harriers successfully nesting again in Northumberland. This is our fourth year in a row and the most that have fledged in recent times. The reason we know so much about these birds and have been able to successfully tag them is due to the excellent work of the Natural England, Forestry Commission and RSPB staff and volunteers with some good partnership working. Let’s hope this year’s birds can survive to raise their own chicks in years to come; we will be following their progress with interest.”

Dr. Cathleen Thomas, Hen Harrier LIFE Project Manager, RSPB, said:  “It’s great news that hen harriers have successfully nested again in Northumberland. These birds are so rare in England that any fledged chicks are a huge cause for celebration. We will now be following the movements of these chicks very closely and hope that they make it to adulthood without falling prey to the illegal persecution that has virtually wiped them out as a breeding species in England.”

Andrew Sells, Chairman of Natural England, said:  “The success of the Hen Harriers once again in Northumberland is an important contribution to the national population and a tribute to all those working hard for the survival of this breathtaking bird.

“Reviving the fortunes of the hen harrier has been a cause close to my heart and I very much hope that we are now on the right path. Nationally this has been a good year but it will take more than one good breeding season to bring about a thriving population, so it’s important that there is no let-up in the efforts to conserve this magnificent bird.”