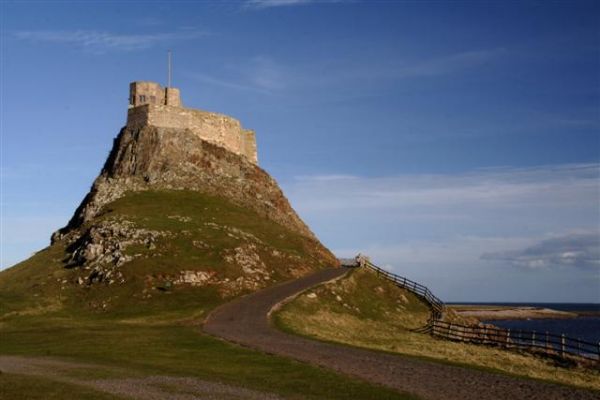 The National Trust has uncovered hidden wall paintings during the £3 million restoration of Lindisfarne Castle in Northumberland.

Conservation specialists discovered what they originally thought was a series of butterfly motifs, after painstakingly removing layers of paint and plaster in the kitchen and the west bedroom of the former 16th century Tudor fort. However on closer inspection, the paintings turned out to be a stylised flower motif, likely to date to the mid- to late-17th century.

“This is such an exciting and rare find.  We are always extremely careful when peeling back layers of history but we did not expect to find these paintings at all. The existence of interior decoration prior to Lutyens renovation of the Castle adds a new dimension to its historic function.  Based on our knowledge of the physical history of Lindisfarne Castle, it suggests that there might have been more to life at the castle than just a military base.”

The Castle will re-open to visitors on Sunday 1 April and a section of the wall paintings will be on show in the kitchen. It will take months for the castle to dry out from the conservation work which means that it will re-open unfurnished. This creates a unique moment for visitors to see the Castle’s architecture laid bare.

Originally built as a fort, the Castle underwent significant changes during the two centuries following its initial construction in 1550.  For the next three hundred years, the fort (as it was known then) was home to temporary garrisons of soldiers whose main job was to man the guns and watch the horizon for trouble.

By the beginning of the 20th century, the building was in a state of disrepair when it was first rented and then bought by Edward Hudson, who commissioned the architect Edwin Lutyens, to reorder and develop the site into a stately holiday home. This process was substantially complete by 1912. Following Hudson’s death in 1936, care of the Castle was passed to the National Trust in 1944.

Lindisfarne Castle is located in the idyllic setting of Holy Island. It’s walled garden was brought to life in 1911 by noted garden designer Gertrude Jekyll and the imposing 19th century lime kilns are a reminder of Lindisfarne’s industrial heritage.

The £3 million programme of repairs and conservation was supported by the DCMS, the Wolfson Foundation, the Path Trust and donations from supporters. The investment and work that has taken place has helped the National Trust care for this special place on behalf of the nation for ever, for everyone. The National Trust is grateful to all its supporters.  Receiving no direct funding from government, we instead rely on the generosity of our members, visitors, donors and legacy pledgers to continue our vital work.

From Saturday 5 May, “dreamed about the flowers that hide from the light”, 2018, an installation of wooden structures and dyed blankets by artist Anya Gallaccio, will take over the castle’s reopened empty spaces. The installation, which will run until Sunday 4 November, is a collaboration between the National Trust and Locus+ and supported using public funding by Arts Council England and a donation from the Henry Moore Foundation.