Half-price ticket offer launched in May half term for Hadrian’s Cavalry Turma! event 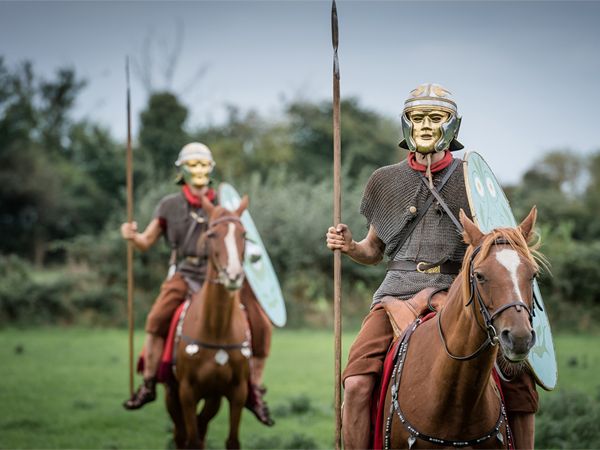 Families looking to experience one of the biggest events in the North of England this summer can take advantage of two special ticket offers this May half term.

Children’s tickets to Turma! Hadrian’s Cavalry Charge in Carlisle, which will see a troop of 30 Roman cavalrymen perform together for the first time in over 1,500 years, are just £4; a 50% saving on the normal price. Available from Saturday 27 May – Sunday 4 June, tickets can be purchased from www.hadrianscavalry.co.uk

In addition, anyone visiting the Northumberland County Show on Bank Holiday Monday (29 May) can take advantage of an additional 20% off all ticket prices – a 70% saving on tickets for children.

The Turma! event, which takes place at Bitts Park, Carlisle on Saturday 1 and Sunday 2 July, sees 30 Roman cavalrymen performing intricate manoeuvres on horseback and showcasing their skills with javelins and other weapons.

Bill Griffiths, head of programmes for Tyne & Wear Archives & Museums and chair of the Hadrian’s Cavalry steering group, said: “Turma! Hadrian’s Cavalry Charge in Carlisle really is a once in a lifetime event and a unique chance to see a full troop of Roman Cavalry in action. There will be lots for families to do, including activities before the show, exploring the Roman encampment, supporting the red or blue teams as they compete before the Emperor and the spectacle of 30 cavalrymen performing in formation.

“We’ve created a special ticket discount especially for visitors to the Northumberland County Show where Roman-themed events will be part of the programme. Tickets will be available to buy from the Glorious Northumberland Marquee all day.”

A Roman encampment will be stationed outside the Glorious Northumberland Marquee where Roma Antiqua will showcase infantry soldiers and Roman surgical equipment and a Roman Cavalryman will demonstrate cavalry skills and kit. There will be a live demonstration by the Roman Cavalryman at 13.30 in the main Northumberland Show arena followed by the Pony Club Roman Games, inspired by Roman cavalry training exercises.

Turma! Hadrian’s Cavalry Charge in Carlisle will see cavalry riders display their skills with spears as well as perform interweaving manoeuvres across the arena. Audiences can cheer on their chosen team as the cavalrymen score points throughout the competition. A mini Hadrian’s Wall visitor village will feature all the forts and visitor attractions from along the Wall. Food, drink and family-friendly events complete the modern-day experience of the Wall.

Turma! Hadrian’s Cavalry Charge in Carlisle is part of the Hadrian’s Cavalry exhibition, currently taking place at 10 museums and heritage attractions along the full 150mile length of Hadrian’s Wall World Heritage Site area. Running until Sunday 10 September, the exhibition celebrates the cavalry regiments that once guarded the mighty North West frontier of the Roman Empire. It brings together a unique group of Roman cavalry objects including ornate helmets, armour and weapons on loan from national and international museums; all shown alongside objects from museums across the Wall.

Turma! Hadrian’s Cavalry Charge in Carlisle takes place on Saturday 1 and Sunday 2 July at Bitts Park, Carlisle. Performance times are 2pm and 6pm on Saturday 1 July and 4pm on Sunday 2 July 2017. Throughout May half term, Saturday 27 May – Sunday 4 June, children’s tickets are just £4. An additional 20% discount is available on all tickets purchased at Northumberland County Show.

Regular ticket prices are £8 for children aged 5yrs-16ys (children 4yrs and under go free) and £12 for adults. A special family ticket for two adults and three children costs £35.

There are lots of Hadrian’s Cavalry-themed events taking place at exhibitions venues throughout the half term holidays. Unearth some of Northumberland's hidden secrets with Victorian archaeologists at Chesters Roman Fort from Saturday 27 May to Sunday 4 June and recreate the mysterious look of the masked Roman cavalry riders at Segedunum Roman Fort and Museum on Monday 29 May. For full details of all the events taking place, visit www.hadrianscavalry.co.uk