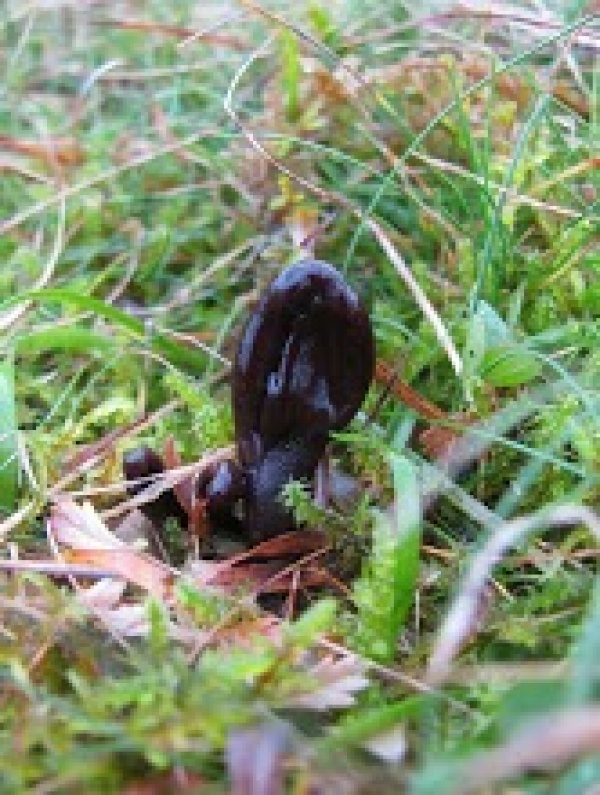 A field near Greenhaugh in Tarset has become a source of excitement for mycophiles with the discovery during autumn’s waxcap season of some very rare members of the genus Hygrocybe.

Waxcaps are jewel-like fungi that seem to appear overnight when conditions are mild and wet in autumn. They are fungi of unimproved grassland that is often rich in moss and grazed by cattle or sheep. They are indicators of an ancient landscape untouched by plough or fertilizer and can be recognised by their array of bright colours of red, pink, white, orange, yellow and green waxy topped caps.

The ancient waxcap haven is owned by Northumberland National Park resident and smallholder, Jan Ashdown, coordinator of the Tarset Archive Group which responded to an appeal by Biodiversity Ranger, Shaun Hackett, for information for a National Park survey. Jan reported sightings of various types including the Crimson waxcap – a striking blood-red, waxy-topped toadstool and an indicator of rich fungal sites.

When Shaun visited the site he was surprised and delighted to find dozens of these spectacular toadstools throughout the field. Further searching revealed a number of other rare and uncommon fungi such as `The Ballerina` and `Citrine` waxcaps. But things kept getting better when the `Blushing` waxcap was seen too; a very uncommon species recorded from only a handful of sites in Northern England.

Then a waxcap was spotted that has not yet even been given a common name – Hygrocybe canescens, and this was confirmed as the very first sighting in England! As if this wasn`t enough, another find was made of a different type of grassland fungi – the Dark Purple Earth Tongue - which is only known at a handful of sites in England and is classed as a threatened species throughout Europe.

“Northumberland National Park is one of the most lightly populated areas of the country and the stock farming way of life hasn’t changed for centuries. The farming community of Tarset already has wonderful ancient haymeadows so it is fitting that they also have one of the country’s best Waxcap sites. This site shows what can be found with the help of farmers and local residents and adds to our understanding of the distribution of these species and their habitats. It is accepted by mycologists that Britain is the best place in Europe for this assemblage of fungi and finds like this help confirm the commonly-accepted idea that rural upland areas such as the farmed landscape of Northumberland National Park will prove to be a stronghold in Western Europe.

“Meanwhile, a little further south, two seasons of surveying grassland fungi along a 25 kilometre stretch of Hadrian`s Wall looks as though it will confirm this World Heritage Site as one of the best places in the UK for waxcaps. One of the most interesting finds there being the very rare `Date Waxcap`. Full results for this survey are expected in 2014.”

In Europe, waxcap grasslands and their associated fungi are of conservation concern as formerly commonplace unimproved grasslands have declined dramatically as a result of changes in agricultural practice. By 1993, 89% of European Hygrocybe species appeared on one or more national ‘red lists’ of threatened fungi. In the UK, some grasslands have gained a measure of legal protection as Sites of Special Scientific Interest because of their waxcap interest.

The National Park is gradually identifying and mapping the old waxcap grasslands from Hadrian’s Wall to the border with Scotland and would be pleased to hear from anyone who thinks they have seen outcrops of these transient fungi. The best method is to take a photo with a mobile and email it to shaun.hackett@nnpa.org.uk. Please include grid reference or detailed specification of the location.

Autumn and mild wet winters are the best time to spot waxcaps and their vivid colours can be the first indication of a find.