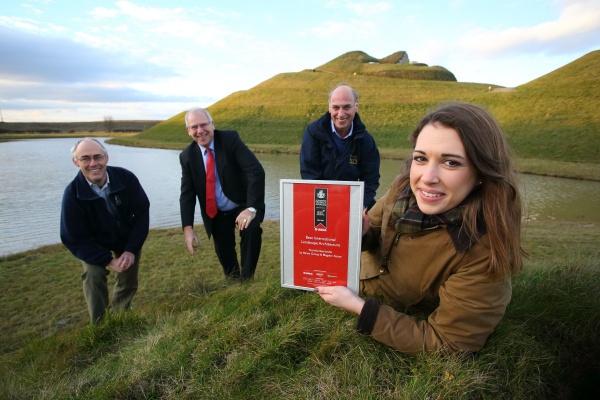 The North East’s newest tourism and cultural landmark has been named ‘Miss World’ after triumphing in a prestigious global property industry awards competition.

The development of Northumberlandia, the world’s largest human landform, by regional property and energy firm the Banks Group and the Blagdon Estate, was chosen as the winner of the Best Landscape Architecture category in the ‘World’s Best’ final of the 2013 International Property Awards.

Northumberlandia qualified for the awards after winning its category at the 2013 UK Property Awards in October, and was competing against the winners of eight equivalent awards’ programmes representing Africa, Asia Pacific, Arabia, Canada, Caribbean, Central & South America, Europe and the US.

Projects in Turkey, Malaysia and Mexico were also shortlisted in the category in which Northumberlandia triumphed.

Now in their 20th year, the International Property Awards celebrate the highest levels of achievement by companies operating in all sectors of the commercial and residential property industry.

Blagdon and Banks wholly funded Northumberlandia’s creation, investing around £3m in the project and taking two and a half years to construct the landform using 1.5 million tonnes of carefully selected stone, clay and soil from Banks’ adjacent Shotton Surface Mine.

Northumberlandia, which is now managed by independent charity The Land Trust in association with the Northumberland Wildlife Trust and Azure Charitable Enterprises, has proved extremely popular with both local residents and visitors to the region, with over 100,000 people visiting the site over the last year.

Work on the construction of a new visitor centre began in October, after The Land Trust secured funding totalling £242,000 from the Banks Community Fund and Defra’s Regional Economy Grant, and it is expected to open early in the New Year.

Earlier this year, Northumberlandia was chosen as the winner of the Tourism & Leisure category of the Royal Institute of Chartered Surveyors (RICS) North East Renaissance Awards, which honour “projects that make an outstanding contribution to and demonstrable impact on tourism and leisure facilities in the region.”

The landform was also shortlisted for the Excellence in Planning & Design for the Public Realm category of thenational Royal Town Planning Institute Awards for Planning Excellence.

Katie Perkin, communications manager at The Banks Group, says: “Winning this global award provides a wonderful finale to a fantastic first full year for Northumberlandia.  The quality of the landform’s design and construction, and the cultural, community and tourism impact that she’s having have been widely recognised by both a range of awards and the tens of thousands of people who’ve already been to visit her.

“The projects against which Northumberlandia was competing for this award represent the very best in landscape architecture around the world, so this award is a real coup for both everyone involved with the project and North East England as a whole.”

“Being in this sort of spotlight provides a great platform for the region as a whole, as well as for Northumberlandia herself, and we hope it will lead to even more visitors coming to the North East to take a look at everything that’s on offer here.”

Bob Downer, chief executive of Blagdon Estate, adds: “Everyone involved in Northumberlandia are delighted to receive this international award to add to the regional and national prizes already awarded.

“Blagdon Estate is privileged to be part of this project which is now gaining recognition as a unique landscape and arts project as well as a gateway to the rest of Northumberland, while enhancing the leisure facilities available to the local community.”

For further information on all aspects of the project, please visit www.northumberlandia.com