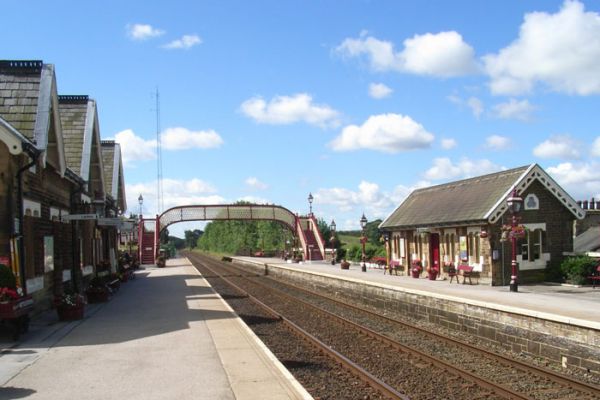 Nearly 20 years before Alfred Wainwright started to become famous for his Lakeland fells guide books he planned a walk which would take him “…by way of the Yorkshire Dales and Durham along the eastern flanks of the Pennines as far as Tynedale, from which far-away valley I planned to return along the western slopes of the range.”

So on 24th September 1938 he left his home in Blackburn, took the train to Settle in North Yorkshire and “just after noon” set out on the first stage of what he later called his “Pennine Campaign” - a 17.5 mile walk to Buckden climbing nearly 3000 feet in the process.  Similar long hard days were to follow before in his words "Around eleven o’clock on the morning of September the thirtieth, I really lived….The sun was shining. Life was good. Existence at last had a meaning. I came to the Wall as I knew I would, half running."

During the walk he sent back postcards on which were probably his first landscape sketches. The following year he wrote a narrative description of the walk, showed it to some colleagues and put the manuscript away in a drawer where it remained untouched for nearly forty-eight years. Then, in 1986 whilst working on a coffee-table book ‘Wainwright on the Pennine Way’ his editor was told of it and persuaded him to publish it as  ‘ Pennine Journey - The Story of a Long Walk in 1938’

An initiative by the Wainwright Society led eventually to a guide book being published in 2010 and in 2013 the whole 247 mile long route which had been changed to one using footpaths from the roads used by Alfred in 1938 was waymarked.  The next step was to get the route onto Ordnance Survey maps especially given Alfred’s love of the work of the Ordnance Survey – “I admire their work immensely, being lost in admiration of all their work. My private sanctum at home is crammed with Ordnance maps, most of them dog-eared with over-much use but all loved and respected and handled with reverence.” and by February 2016 the route was on all relevant Explorer and Landranger maps.

Alfred’s careful planning nearly 80 years ago means that the walk traverses some of the most delightful walking terrain in northern England:  savour delightful river valleys, high fells and wide expanses of moorland; be fascinated by the historic places on its route, with the World Heritage Site of Hadrian’s Wall pre-eminent; and enjoy the hospitality of the towns and villages along the route.  Since his  ‘A Pennine Journey’ in 1938 the nature of the countryside through which the route passes has been recognised such that 230 miles of the route passes through National Parks and the North Pennines Area of Outstanding Natural Beauty with 20 miles along the lovely Eden valley.